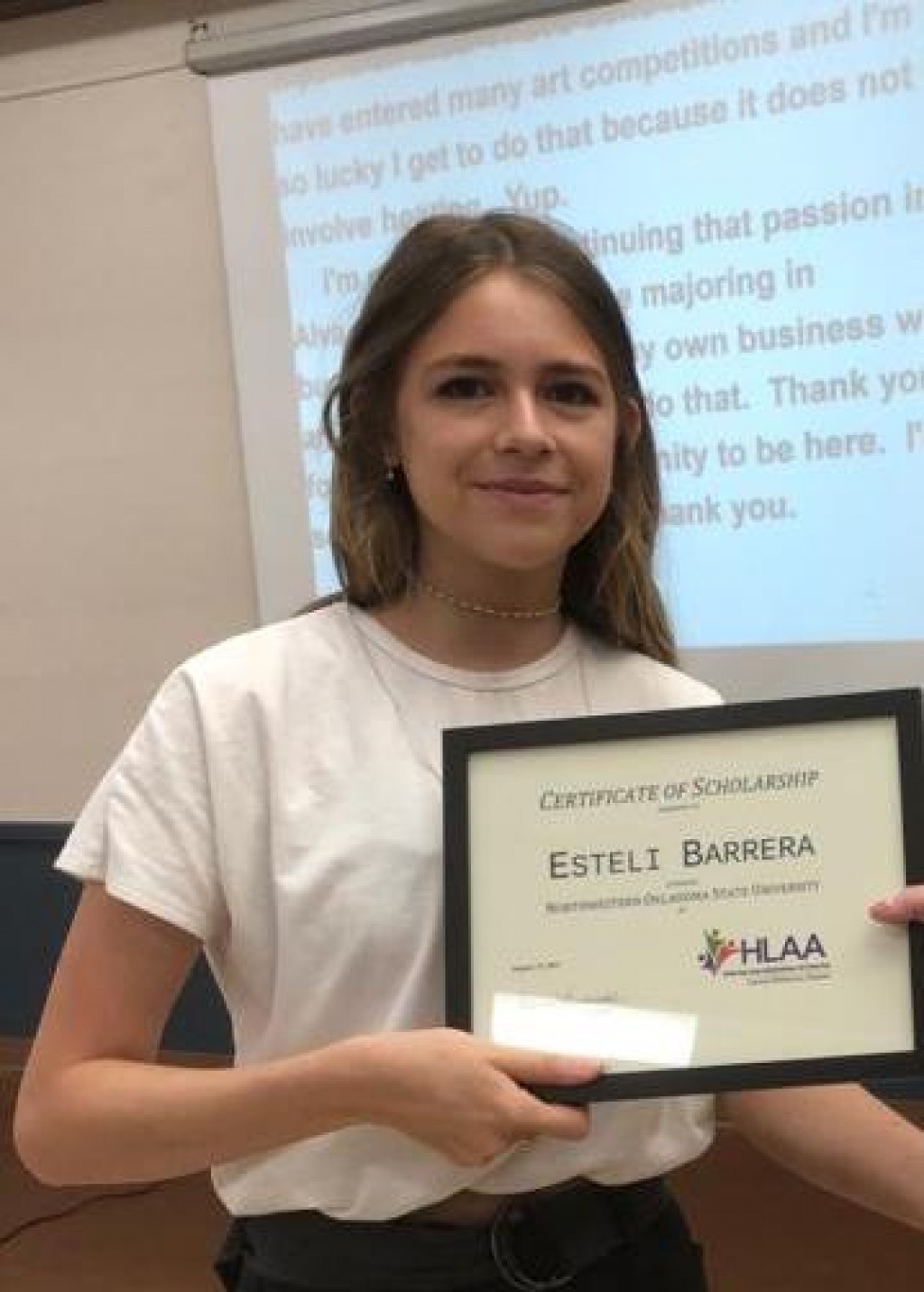 Esteli Barrera, the daughter of Maria Barrera, will be attending Redlands Community College in El Reno in the fall of 2021. Esteli is a graduate of Fairview High School. Her first language is Spanish but she learned English as a kindergartener. As a young child she would hear a sound but couldn’t tell from which direction it came. She did well in school but did experience some bullying because of her “disability.” At her first job, as a waitress, she experienced frustrations because of all the conflicting sounds coming from every direction. In high school she tried music & sports but found art to be most satisfying. Esteli has completed three commissions to paint murals in and around her home town. She plans to study business and art and hopes to start her own mural painting business upon graduation. Esteli’s philosophy is that art will help to inspire people and brighten their world. (Photo attached)

Ashley Haws, the daughter of Tina Haws Sayer, Oklahoma, cannot recall a time without hearing loss. Although she realized she could not hear people speaking to her, it was several years before she was officially diagnosed with a hearing loss. Fortunately, she had an empathetic first grade teacher who helped in the process of getting hearing aids. Ashley said that when you fit a child with hearing aids many things happen, mostly good. She learns to be responsible; to wear her hearing aids and to sit near the teacher and  make many adjustments not required of other children. A  headset was necessary in Ashley’s first job but it would not allow the use of her hearing aid. Thankfully Bluetooth has changed that – hearing on the telephone, in class, distance learning, and face masks are all improved by the new technology. Ashley will be attending NWOSU in Alva this fall. Her future plans are to work in the medical field, the college of nursing. Although she has had her share of life challenges, she just wants to work hard and help others. (No photo available)

Daniel Knowsley is the 18 year old son of Tom and Cyndi Knowsley. Daniel is a 2021 graduate of Bridge Creek High School and plans to attend Oklahoma City Community College in the fall. Daniel was born with a high-frequency moderately severe and severely profound hearing loss. He received his first pair of hearing aids when he was 5 weeks old and began school at 3, a preschool for children with hearing loss, where he did so well there that he was kicked out! He was mainstreamed into preschool when at the age of 4 and continued in the Bridge Creek school system until graduation. Daniel’s interest is graphic design but his idea of having a successful life and career isn’t all about the money, it consists of being a good person, respecting other opinions and being kind. He considers helping his family and others to be a success in and of itself.